The negative Effects of Assumptions and Presumptions 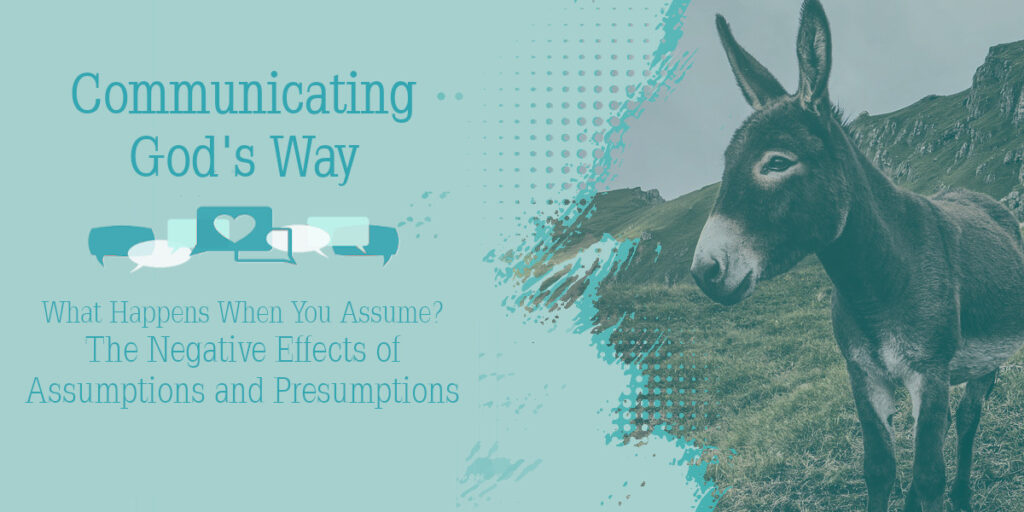 We all know what happens when you assume, right? Let’s just say it’s asinine, and leave it at that. Which is why this week in our Communicating God’s Way series we’re talking all about the negative effects of assumptions and presumptions in our conversations. It’s time to learn a better way to communicate!

Just in case you found this post through a search and have missed the first three in the series, here’s what you’ve missed so far:

So now we’re ready to talk about these two major hindrances to good listening – presumptions and assumptions. These practices block our ability to communicate effectively, waste everyone’s time, and make fools out of everyone involved.

What Happens when You Assume (And Presume)

Perhaps before we do anything else, we should lay out a few definitions, just to be sure we’re all on the same page. We may not all be super clear on the difference between an assumption and a presumption.

Both words imply the taking for granted of specific information, or the accepting of something before it is a reality. When we presume and assume, we’re believing a thing either will happen a certain way, or has already happened a certain way without having the facts to know for sure that it has or will happen that way.

While it may seem like presumptions are not as dangerous as assumptions, when we take into account our sin natures, both practices have a way of greatly hindering intimacy in a relationship and tend to destroy communication.

*Please take a moment to stop and read Joshua 22 before going any further.

Real quick, let me set the backdrop for this account. The people of Israel, after spending 40 years wandering around the desert in punishment for their rebellion against the Lord, have finally entered the promised land under the command of Joshua.

About a third of the people (those from the tribes of Reuben, Gad, and half the tribe of Manasseh) had been given land on the east side of the Jordan River. Technically, they could have stayed there and refused to cross with the rest of Israel to fight the Canaanites and claim the promised land. But they didn’t do that. They left their families and possessions behind and traveled with their kinsmen to help them in battle.

At the start of Joshua 22, the fighting had finally ended and Israel had successfully claimed the Promised Land. Joshua released the men from the tribes of Reuben, Gad, and the half-tribe of Manasseh to go home to their families.

But just before they crossed the Jordan, these men decided to build a huge alter as a reminder to the rest of Israel that they were still a part of the nation. They did it because they were afraid as time passed, they’d be forgotten on the other side of the Jordan and be excluded from God’s people.

When the rest of Israel heard about the alter, they ASSUMED it had been built as a replacement of the Lord’s alter in front of the Tabernacle at Shiloh. Then, they PRESUMED those men had done it as an act of rebellion, like their ancestors, who did not want to follow God’s instructions to the letter.

In response, the Israelites mustered their entire army and prepared to head out and wipe out their relatives for their presumed rebellion.

Thankfully, they paused long enough to send a delegation first to talk it out. And even though they came at their family members, not with questions but with serious accusations based on wrong assumptions and presumptions, God was gracious. The whole group was able to set it all right and everyone was able to leave satisfied.

How often do we do nearly as much damage as could have been done there based on our own misguided presumptions and assumptions?

The Heart of what Happens when You Assume and Presume

I believe what this issue boils down to is pretty much the same as what we talked about last time when we talked about listening. Let’s look again at Proverbs 18:2, this time in the English Standard Version:

Proverbs 18:2 (ESV) – A fool takes no pleasure in understanding, but only in expressing his opinion.

Unfortunately, the damage we do in the process too often breaks apart precious relationships, many times beyond repair.

Proverbs 17:14 – Starting a quarrel is like opening a floodgate, so stop before a dispute breaks out.

Proverbs 14:16 – The wise are cautious and avoid danger; fools plunge ahead with reckless confidence.

Proverbs 12:23 – The wise don’t make a show of their knowledge, but fools broadcast their foolishness.

Proverbs 13:16 – Wise people think before they act; fools don’t – and even brag about their foolishness.

Proverbs 15:28 – The heart of the godly thinks carefully before speaking; the mouth of the wicked overflows with evil words.

I could go on and on posting Proverbs about the importance of being cautious before we open our mouths, but I think we all get the picture. To presume and assume is to believe we know more than we actually do. Plain and simple. It is absolute foolishness to open our mouths and assert those ideas before they’ve been verified. Yet, we ALL do it.

The negative effects of assumptions and presumptions is that we trust them more than we trust just about anything else. Often times, even more than good hard facts! We forget these VERY important truths from Scripture, at least, when it applies to ourselves:

John 7:24 – Look beneath the surface so you can judge correctly.

Jeremiah 17:9 – The human heart is the most deceitful of all things, and desperately wicked. Who really knows how bad it is? But I, the Lord, search all hearts and examine secret motives. I give all people their due rewards, according to what their actions deserve.

How different would our communication be if we operated from a place of trusting GOD to reveal truth rather than trusting our own ability to discern a situation? What if we really understood the deceitfulness of our own hearts, and stopped to consider what happens when you assume and therefore stopped trusting our desperately wicked instincts?

What if, instead of constantly trying to judge the secret motives of our spouses, we simply learned to trust God to dole out justice according to what we all actually deserve?

What if we allowed Him to teach us how to make clear boundaries to keep us safe that depend simply on the concrete actions of others, not on our assumptions about their motives?

What if, as we learned to trust God, we stopped to take the time to LISTEN to each other without having decided ahead of time what is in the other’s heart?

Can you imagine what would happen in our marriages if the negative effects of assumptions and presumptions were no longer an issue?

I believe if we did these things, we could change the world! Or, at least, our world!