The Next Ninety Days – Separation 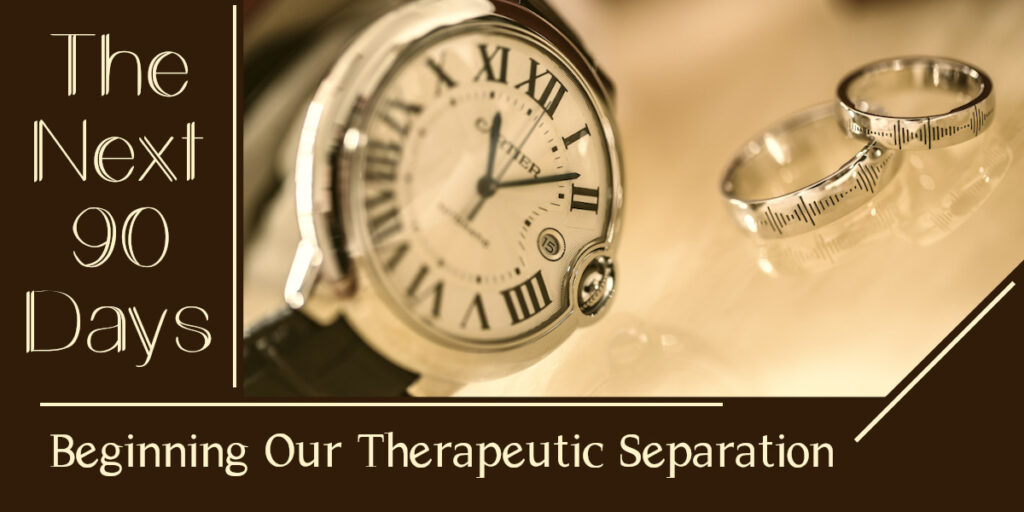 * What you read below is what I wrote in February 2017, on the night Steve moved out to start our 90-day time apart. God taught us a lot during this time, and if you keep reading through the posts in the “Our Story” category you’ll get to see how God worked. As we’ve worked through the stages of healing, we’ve shared our experiences, hoping it will bless and encourage others on the same path. So, here is what I wrote as we began our therapeutic separation:

“Do not be afraid or discouraged, for the Lord will personally go ahead of you. He will be with you; he will neither fail you nor abandon you.” Deuteronomy 31:8

My love is an addict.  His brain doesn’t work right because ever since he was a very young man he has made one terrible decision after another when it comes to his sexuality.  Each one of those decisions had a consequence.  They released neurochemicals in his brain much like the high one receives after drug use.  As time passed and those sins piled up his brain began to depend on those neurochemicals and then it began to act as if it needed them.

When a drug addict decides to get clean he has to go through a period of detox to break the chains that the chemicals in the drugs have on his brain.  Sexual addiction is no different.  The brain has to be given time to heal. The neurochemistry has to reset.  It is generally agreed upon that 90 days is the time needed for this to happen.  We knew we needed to do this 90 days of abstinence, so when we began to consider a period of separation this seemed like a good time frame.  Kind of a “kill two birds with one stone” type scenario.

Our councilor presented us with something called a “therapeutic separation” and it was what he recommended we do.  His template for this separation included three phases of equal time in which each phase would include its own set of rules:

As I’ve spent more time looking into the idea of therapeutic separations, I realized that there really aren’t any rules.  Different councilors have different ideas and different situations call for different approaches.  The three phase method seems to be unique to our councilor.  The only consensus seems to be that the terms of the separation be agreed upon ahead of time and that those conditions be met in order to end the separation.

Our councilor’s suggested time frame was different than the one we ended up choosing, but we felt the time he was suggesting was just too long.  It seemed dangerous to both of us.  We sought the advice of some of our other trusted councilors and they all agreed with us.  As I’ve read more opinions from various Christian counseling websites this seems to be the opinion of most if not all of them as well.  90 days made sense to us all.  It sounds miserable, but doable.

We did, however decide to keep the three phase model he suggested.

So, that means that I will not get to see my love’s face for 30 days. I hugged him and kissed him tonight before he left and I won’t get to do that again for a whole month! During that month we will both be dedicating ourselves to fasting and prayer and to the Word of God.

**EDIT – We ended up changing these parameters about a week into the separation. I explain all of that and what we actually ended up doing HERE.

His battle will be to break the chains that bind him to his sin.  He is asking God to reshape his mind.  To use the Word and the power of the Holy Spirit to grow his conscience.

He has spent so much time compartmentalizing his actions, learning to ignore and eventually silence the voice inside him that said what he was doing was wrong.  Lies have become such a huge part of who he is – both in telling them and believing them!  He is believing that as he fills his mind with the truth of God’s Word those lies will lose their power and their grip on him.

He is also going to work on serving our children (and me, indirectly) through this time which he hopes will help break down the walls of selfishness that he has built up all around him. He has so much work in front of him, but I am hopeful that this time of separation will serve as a motivator and not as a deterrent to pick up the weapons God has given to every believer and join the battle! With God’s help, he will win!

My battle will cover several areas.  I will, of course, be crying out to God for my love.  I will be interceding for him constantly.  But I will also be learning to leave him right there. In the hands of God.

I will be asking God to show me if there are any areas in which I have been “co-dependent” (I really hate that term…but it is what it is) and seeking Him to show me what He wants from me.

Above all else, I want to please Him! I do not want to ever make an idol of my love. He is part of me. God has joined us together and what God has joined together should not easily separate. It should hurt!  But if my love in any way takes a place in my life that belongs only to God, I want to end that now! So that will be my prayer – that God will use this time to show me where I have not put Him in His proper place in my life.

Finally, I am trusting God to help me as I try to help our three precious children process this horrible situation. I want them to look back years from now on this time as the months when their faith became their own. When they learned to trust God when life hurts so bad you can hardly stand it.  I am praying it will be the time when they learned to wait on God through the trials believing that He was working all things together for good. When they learned that no human will ever get it all right, and that the only One we can put our hope in is the Lord!

Finally, we will all be praying these verses over our family.  Won’t you join us?

Trust in the Lord with all your heart; do not depend on your own understanding. Seek His will in all you do, and He will show you which path to take. Proverbs 3:5-6

When I think of all this, I fall to my knees and pray to the Father, the Creator of everything in heaven and on earth.  I pray that from his glorious, unlimited resources he will empower you with inner strength through his Spirit.  Then Christ will make his home in your hearts as you trust in him. Your roots will grow down into God’s love and keep you strong. And may you have the power to understand, as all God’s people should, how wide, how long, how high, and how deep his love is. May you experience the love of Christ, though it is too great to understand fully. Then you will be made complete with all the fullness of life and power that comes from God. Now all glory to God, who is able, through his mighty power at work within us, to accomplish infinitely more than we might ask or think. Glory to him in the church and in Christ Jesus through all generations forever and ever! Amen. Ephesians 3:14-21