Waiting for the Other Shoe to Drop 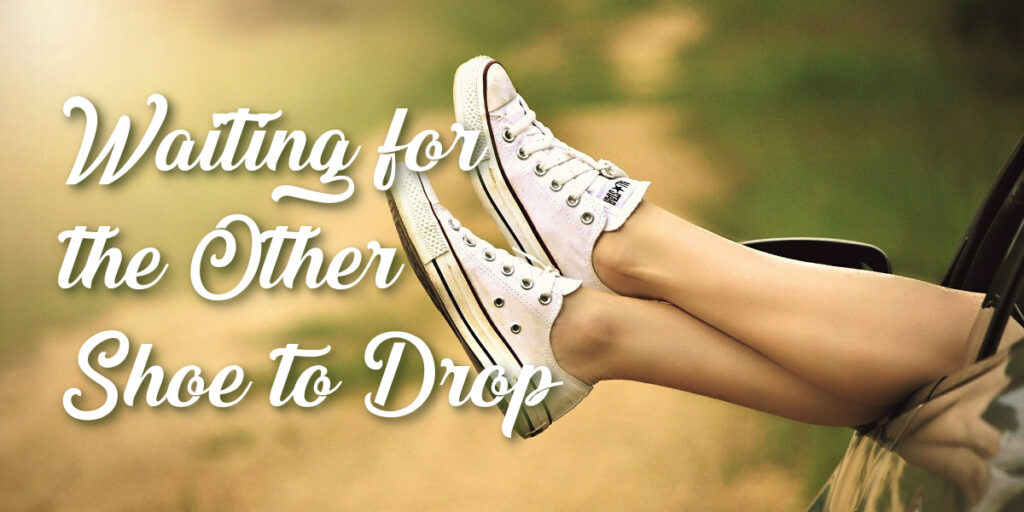 Often, when lies have defined a relationship for many years, we’re left wondering, will I ever stop waiting for the other shoe to drop? Even after years of solid recovery, many of us find ourselves struggling to believe we’re not still being lied to. How can we ever know for sure, we wonder? What if we’re being naïve or foolish? What if He got a whole lot better at hiding it? Why didn’t God reveal the truth sooner the first time? How can I be sure He’ll reveal it this time? What if… How could he… Why did He… How will I… The questions are endless and maddening!

So how can we put a stop to them before we lose our minds, and bankrupt our faith?

Before we get into the answers, let’s take just a minute to talk about why we simply can’t settle for a life in which we’re always waiting for the other shoe to drop. It may seem, based in our fear of being hurt again, like living that way is wise. We might believe we’re just protecting ourselves.

But a life lived in fear is no life at all.

That is a LONG and terrible list of negative side effects! Surely, we can agree this is no way to live!

One way or another, we have to be able to move past the fear. Which means, we need to determine that either: we are not safe where we are and need to separate ourselves from the danger; or we are safe, and we have to learn how to let go of our constant fear.

We have to ask ourselves some very hard questions here friends. Do we really want to heal? Do we really want to be well? Have we become accustomed to life as a victim, and found our identity there? Are we willing to release the one who has hurt us from the punishment they deserve if they have truly repented and in giving them the gift of grace, give ourselves permission to be whole?

Oh how I hope we can choose freedom from constantly waiting for the other shoe to drop!

2 Timothy 1:7 (ESV) – For God gave us a spirit not of fear but of power and love and self-control.

So… IS He Still Lying to Me?

Of course, before we determine how to move on, we have to figure out if we should. There are two very different paths that I should take depending on whether he IS still lying to me, or if he has learned to tell the truth.

So how can I know if He’s still lying to me? Well, the fact is, a person who is truly repentant will live in the open. He will be willingly transparent. He’ll respond to your doubts with humility and gentleness. He’ll be open to finding ways to prove himself to you such as regular therapeutic polygraphs. A changed person is… well… changed. You can read a lot more about what real recovery looks like in this article.

If you’re seeing a lot of the same old excuses and deflections and projections, if there is anger in response to your doubts, if getting information out of him is like pulling teeth – beware. That is not a changed man. Set boundaries, and set them fast. Then, stick to them like your life depends on it! It sort of does.

But if there is real, consistent change, trust it. Of course, I’m not talking about a week or two, or even a month or two of consistently changed behavior. I am talking about a man who has become a new creation in Christ and lived there for many months at the least and preferably a year or two.

If that is what we’ve seen, sweet friends, it’s time for us to choose healing! We’re only hurting ourselves by continuing to live in fear.

Can I Trust God? Is He Trustworthy?

Which brings me to what I believe is the real issue here: a crippling fear that God is not trustworthy. When we’re constantly waiting for the other shoe to drop, it’s often because we’re torturing ourselves with a belief that God is just waiting in the wings to dole out another “gotcha” moment. We have to face that reality and determine if that’s really the sort of God we’re worshiping.

Revelation 19:11-16 – Then I saw heaven opened, and a white horse was standing there. Its rider was named FAITHFUL and TRUE, for He judges fairly and wages a righteous war.

His eyes were like flames of fire, and on His head were many crowns. A name was written on Him that no one understood except Himself. He wore a robe dipped in blood, and His title was the Word of God.

The armies of heaven, dressed in the finest of pure white linen, followed Him on white horses. From His mouth came a sharp sword to strike down the nations. He will rule them with an iron rod. He will release the fierce wrath of God, the Almighty, like juice flowing from a winepress.

On His robe at His thigh was written this title: King of all kings and Lord of all lords.

Revelation 21:5 – And the One sitting on the throne said, “Look, I am making everything new!” And then He said to me, “Write this down, for what I tell you is trustworthy and true.”

Y’all, if the Bible isn’t enough to convince us of who God is, then there isn’t anything I’m going to be able to say that will. Can I trust God? Yes. For sure. He is trustworthy and true. But we each have to choose for ourselves either to believe it, or reject it.

Why did God let you blindly believe lies for a lot of years without revealing the truth to you? Well, I don’t know. I’m not God. But I can tell you, it might not have been all Him. My own story included a whole lot of burying my head in the sand when He was TRYING to show me truth.

My own story also included a lot of grace and mercy on His part, waiting for just the right time to finally force it all into the open. His timing ensured our healing rather than our ruin. I may have been angry with Him for a while over the timing, but not anymore. Not now that I’ve seen the results. How could I be?

The Bible is clear. Our God is faithful and true, and His words are trustworthy and true. Let’s choose to believe Him friend! Healing begins in that choice. TRUE healing begins with faith.